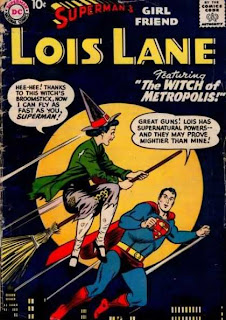 Lois Lane gets her own title (although it's pretty clear that she only got it by dating Superman) in this spectacular, debut issue.

Being the hard-hitting, investigative journalist that she is, Lois is sent to cover the opening of the new Museum of Superstition. Which, by the way, has like three exhibits; a taxidermied cat, a ladder, and two portraits. The portraits are of a young woman named Molly Todd in puritan garb and a scary hag named Mad Molly in the same clothes. Legend has it that Molly turned into a witch every night and cast evil spells.

Lois scoffs at the exhibits and begins to powder her nose before leaving. Upon accidentally dropping her compact and breaking its mirror, she jokes "...I suppose I'm doomed to 7 years bad luck! HA,HA!". The curator warns Lois that she shouldn't scoff and gives her a booklet of ancient legends.

Lois then hurries on to her next assignment, interviewing a scientist who is working on a "youth serum". Lois sniffs at the "odd fumes" which are coming out of the test tubes which hold all the scientist's trial batches -like she's Jimmy Olsen or something- and then goes home to write her articles.

As Lois begins to type, a change comes over her. She has transformed into a twisted, old crone! Grabbing up the booklet of ancient legends, she discovers that "...any maiden breaking a mirror before the witch's picture would also turn into a witch nightly for seven years!". Isn't "witch" more of an occupation? 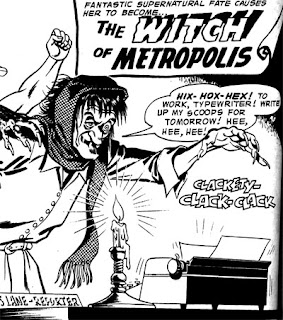 Lois then does what any woman who suddenly found herself transformed into a horrible, old hag would do... she goes for a walk. And since the last person she'd want to see is Superman, he arrives right on cue.

Superman tells the "old lady" to be careful as two felons have just escaped from prison and he's searching for them in this neighborhood.

Two seconds later, Lois runs into said felons. The crooks get rough and start shooting. In desperation, Lois tries casting a spell on the bad guys and Lo! it works! Their bullets turn aside.

When Lois wakes up the next morning, she's back to normal. Of course, when the sun goes down that evening, poof!, witch time!

Lois starts abusing her newfound powers right away, scooping other reporters and feeling tempted to use her spells to learn Superman's secret ID.

Turns out, Lois wasn't cursed at all. She inhaled some of the fumes from a bad batch of youth serum that made her age (at sunset??). All this spell mumbo-jumbo has just been Superman following Lois (whom he recognized all along) and using his powers to simulate her "magic". Superman is spared from looking like a dick in all this, due to the Scientist's advice that the shock of learning about the age formula (which wore off on it's own) could harm Lois. Yeah, 'cause thinking you'll turn into a hideous crone every night for the next seven years isn't stressful at all.

HAPPY HALLOWE'EN Everyone!
Posted by Aaron at 8:00 AM 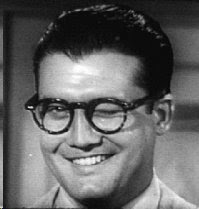 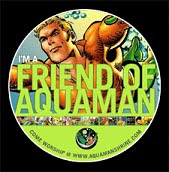 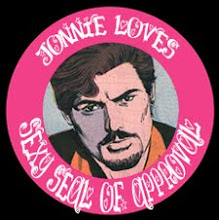